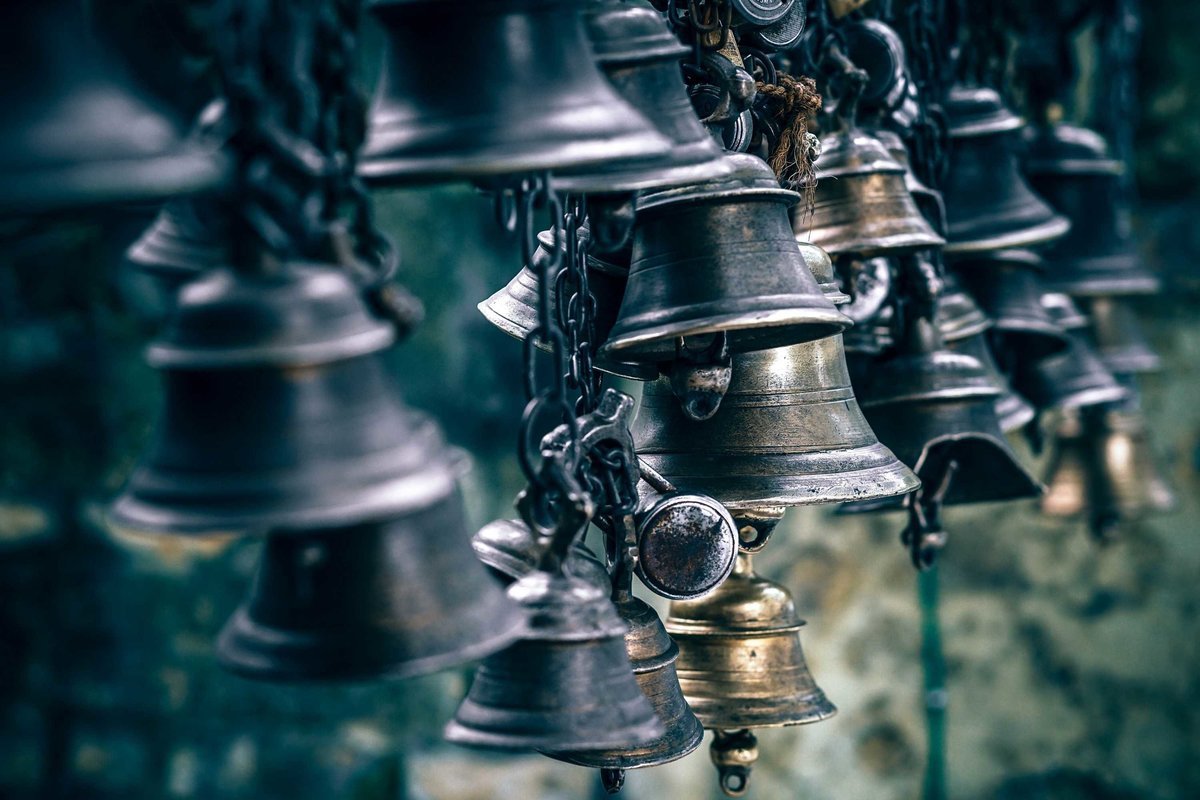 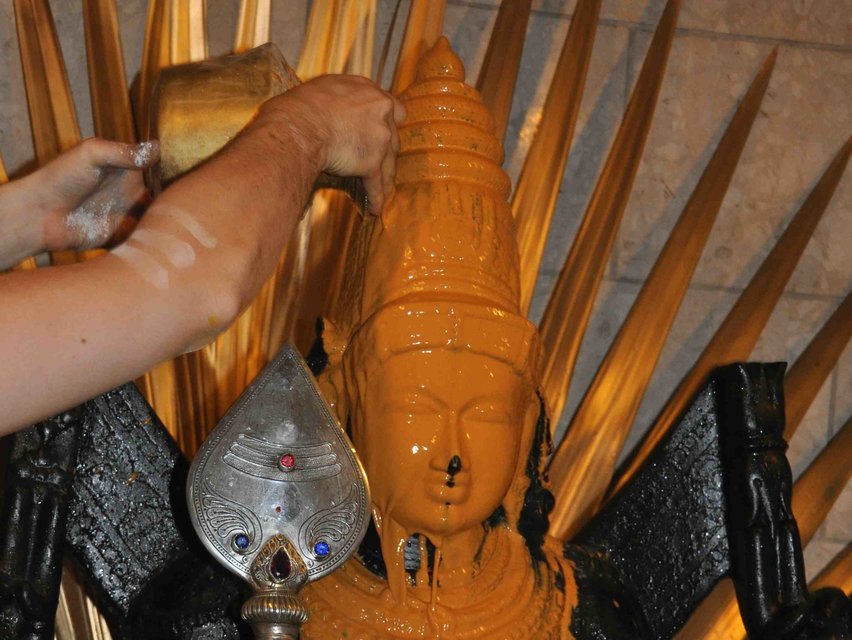 Lord Murugan is amongst the most revered deities in South India. Arupadi Veedu is a collective name given to the Six Abodes of Lord Murugan which include Tiruttani Subramanya Swamy Temple, Palani Dandayudhapani Swamy Temple, Swamimalai Swaminatha Swami Temple, Tirupparankunram Subramanya Swami Temple, Pazhamudircholai Subramanya Swami Temple, and Tiruchendur Senthil Andavar Temple. Lord Murugan is known by different names at each of these temples namely Skanda, Kartikeya, Muruga, Balasubramanya, and Vadivela. According to the sacred Skanda Purana, Devas were tortured by demon Soorapadman in the ancient times. They requested Lord Vishnu and Lord Brahma for help who, in turn, appointed Kamadeva to wake up Lord Shiva from his deep penance. Later, Lord Shiva gave birth to his son Kartikeya who killed Soorapadman to save the Devas. Lord Murga is depicted in the Southern literature as the god of war and love. Kartikeya married Deivayanai after winning the war at Tiruchendur and married Valli out of love. Lord Muruga is also depicted as the God of Kurinji or mountainous region. Arupadi Veedu group of sacred shrines which include the six temples of Lord Murugan share unparallel sanctity and are extremely popular among the devotees. Our Arupadi Veedu tour takes you on an enchanting journey through each of these shrines. Embark on an amazing journey of devotion, faith, and spirituality with our Arupadi Veedu tour. 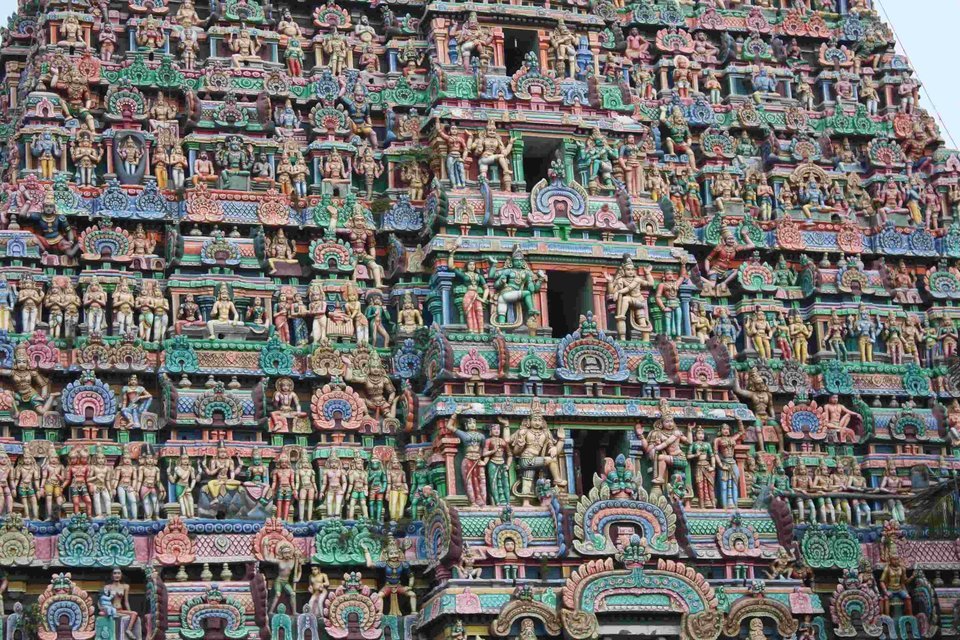 Navagraha refers to the nine planets which include the Sun, the Moon, Mercury, Mars, Venus, Jupiter, Saturn, Ketu and Rahu. The most famous and revered Navagraha temples are located in Southern India in Tamil Nadu, Chennai, Uttar Pradesh, Assam, Maharashtra, Madhya Pradesh, and Karnataka. Each of these temples symbolises the influence of planetary and cosmic forces thereby showcasing the heavenly powers of the nine planets. The Navagraha temples of the South include the Suryanar Kovil or Suriyan Temple dedicated to Sun God, Kailasanathar or Chandran Temple in Thingalur dedicated to Moon God, Vaitheeswaran Koil Temple dedicated to Mars,  Swetharanyeswarar Temple in Thiruvenkadu dedicated to Mercury, Apatsahayesvarar or Guru temple in Alangudi representing Jupiter, Agniswarar or Sukran Temple representing Venus, Tirunallar Saniswaran temple dedicated to Saturn, Tirunageswaram Rahu Stalam representing Rahu or Keelperumpallam Kethu Sthalam Temple dedicated to Ketu. According to legends, the planetary deities were doomed by Lord Brahma to dwell in the wild white-flower jungle or the Vellurukku Vanam. Later, Lord Shiva blessed them to make their abode in the jungle. Six daily rituals are performed in the temples between 5:30 am to 9:00 pm. Two major festivals are celebrated in all Navagraha temples during a calendar year. Our Navagraha Temples tour takes you on an amazing escapade into the realms of mythology, devotion, and spirituality. 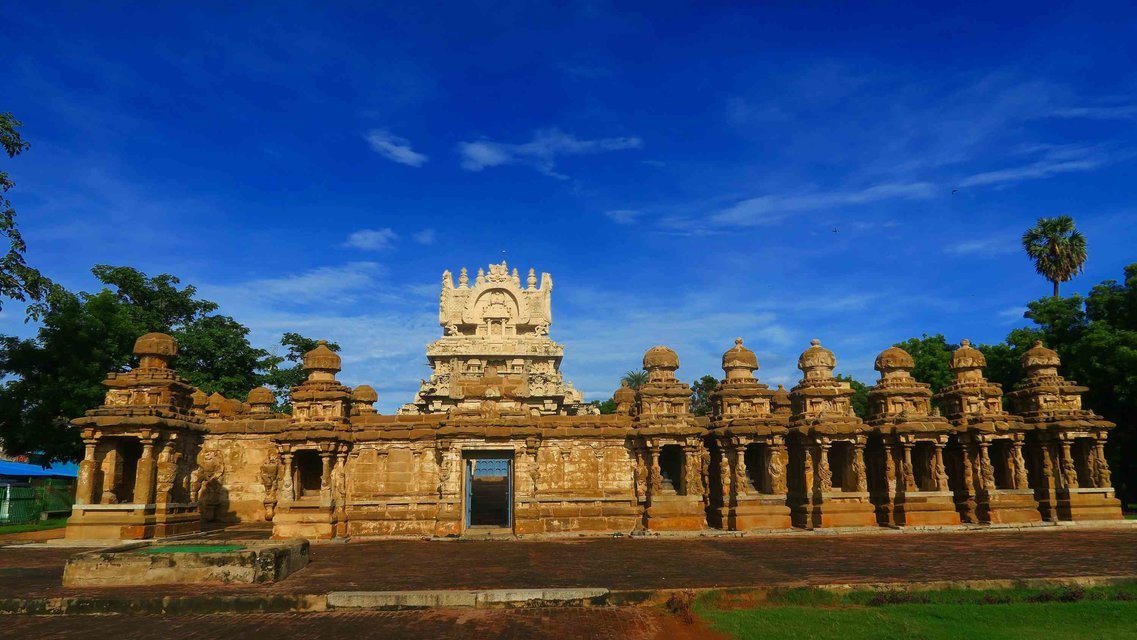 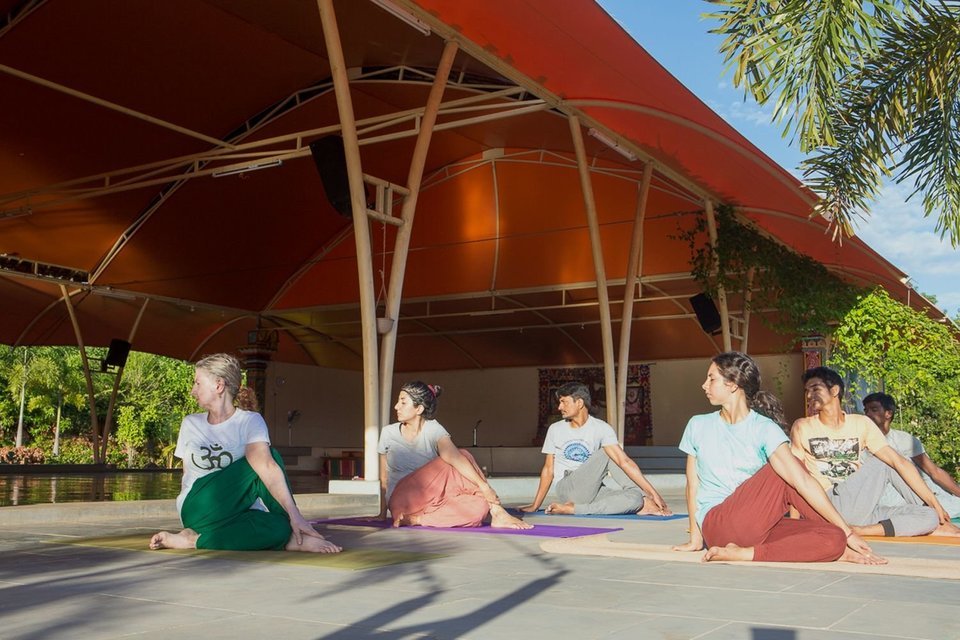 The YTTC - Yoga Teacher Training Program is a 28 days 200 hours fully residential Yoga Teacher Training certification. The program has been intelligently designed to introduce the participants to the finer nuances and benefits of yoga which can help them lead an overall enriching life. But you do not require to be a long-time practitioner or a yoga teacher to enrol for the teacher training program. Anyone who wants to learn more and explore how yoga can help them make beneficial lifestyle changes can enrol for the program. No matter if you have never ever tried yoga before or you do not have prior basic experience. The program has been smartly designed to suit every participant irrespective of their experience with Yoga. Join our YTTC teacher training program tour to the Govardhan Eco-village for an awe-inspiring experience. The Eco-village has been so beautifully designed and well-kept that a mere visit to the place enthrals your senses. Learn numerous vitalizing, energizing &amp; restorative yoga poses. Master the breathing &amp; cleansing techniques. Learn simplified variations of asanas and breathing exercises to suit your comfort &amp; safety. Embrace yoga as a part of your lifestyle to lead a more holistic existence.  Important Dates The 28 days Teacher Training Course will be organized multiple times between November 2018 - March 2020. You can enrol for the following duration or dates: 01 Nov 2018 - 28 Nov 2018 01 Dec 2018 - 28 Dec 2018 04 Mar 2018 - 31 Mar 2018 01 Jul 2019 - 28 Jul 2019 01 Sep 2019 - 28 Sep 2019 03 Nov 2019 - 30 Nov 2019 03 Dec 2019 - 30 Dec 2019 04 Mar 2020 - 31 Mar 2020 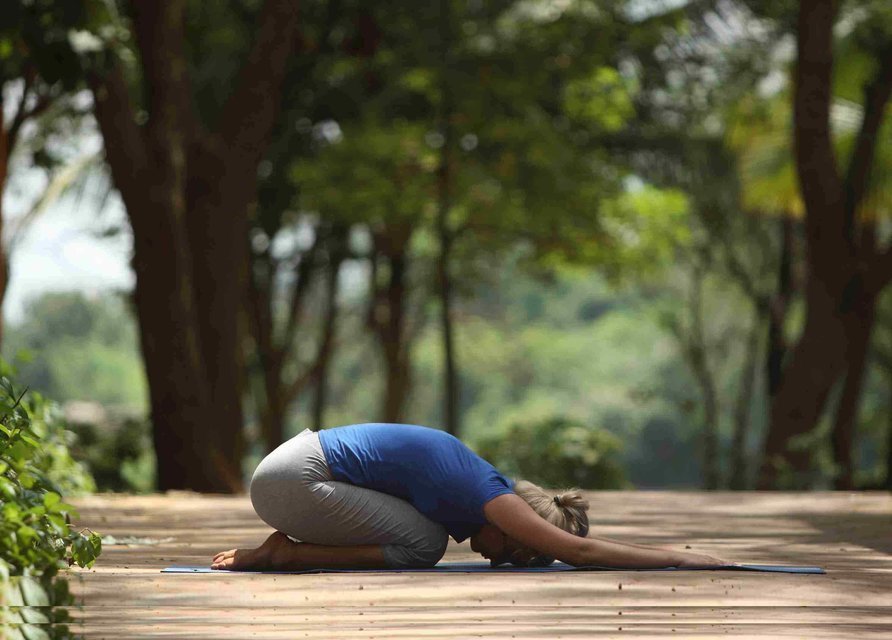 The benefits of Yoga are well-known to all of us. Despite the knowledge and awareness, many times we either do not find the commitment or courage to include Yoga in our daily lifestyle to maintain a healthy schedule. Yog Anubhuti is our special lifestyle program based on an Ayurvedic Dinacharya to help you inculcate a healthy lifestyle. The program helps you develop the commitment to consistently transform your lifestyle into a more healthier one. But you do not require to have a prior familiarity with yoga. Anyone who wants to include Yoga as a part of their lifestyle can enrol for the program. Join our Yog Anubhuti lifestyle program tour to the Govardhan Eco-village for a remarkable experience. Learn numerous vitalizing, energizing &amp; restorative yoga poses. Master the breathing &amp; cleansing techniques. Learn simplified variations of asanas and breathing exercises to suit your comfort &amp; safety. Learn the most pristine, ancient, traditional, authentic Yoga techniques and embrace the dogma of simple living and high thinking. Embrace a Yogic lifestyle for a more holistic living.  Important Dates The 15 days Lifestyle Program will be organized in November 2018 and December 2018. You can enrol for the following duration or dates: 01 Nov 2018 - 15 Nov 2018 01 Dec 2018 - 15 Dec 2018 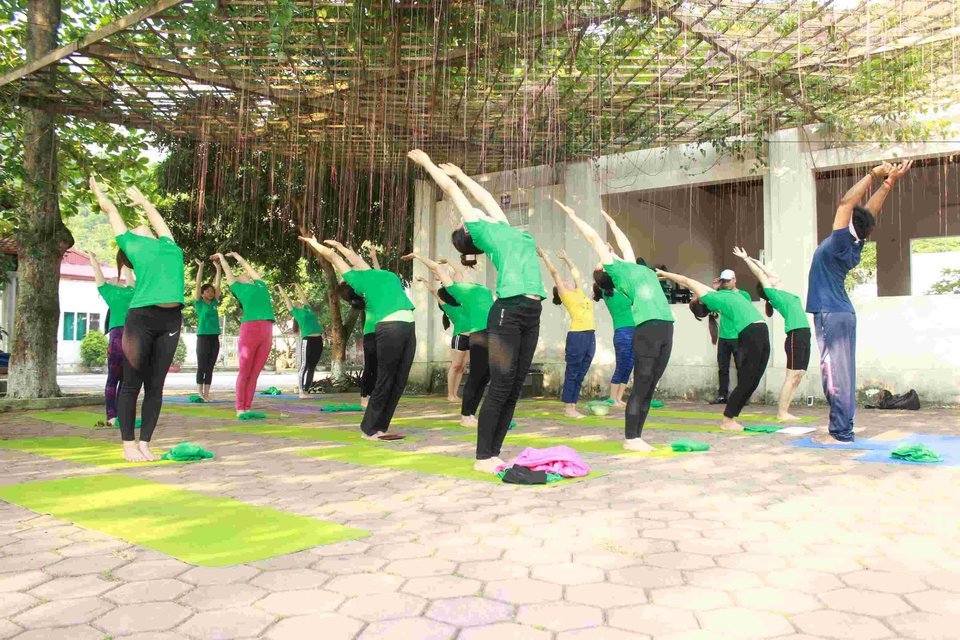 Yog Anubhav - An Introduction To Yoga

Sometime or the other you must have felt inspired to include yoga into your daily lifestyle. But being a novice you must have hesitated not knowing how and where to start? You have heard so much about the benefits of Yoga but find it difficult to take the first step towards embracing a Yogic lifestyle! If that is the case with you, our Yog Anubhav lifestyle program can help you have your first introduction to Yoga. Nurture a healthy lifestyle and develop the commitment to be consistent on the journey of transformation with our Yog Anubhav lifestyle program. Whether you have a prior familiarity with yoga or not, you can join the program if you want to include Yoga as a part of your lifestyle. The program will introduce you to numerous vitalizing, energizing &amp; restorative yoga poses. You will learn about breathing &amp; cleansing techniques used in traditional Yogic practices. You will also learn about some simplified variations of asanas and breathing exercises to suit your comfort &amp; safety. Decipher the secrets of traditional, authentic Yoga techniques in the pure, pristine, and energizing surroundings of beautiful Govardhan Eco-village.   Important Dates The 8 days Yog Anubhav Lifestyle Program will be organized multiple times between July 2018 to December 2018. You can enrol for the following duration or dates: 01 July 2018 - 08 July 2018 01 Aug 2018 - 08 August 2018 01 Sep 2018 - 08 Sep 2018 01 Nov 2018 - 08 Nov 2018 01 Dec 2018 - 15 Dec 2018 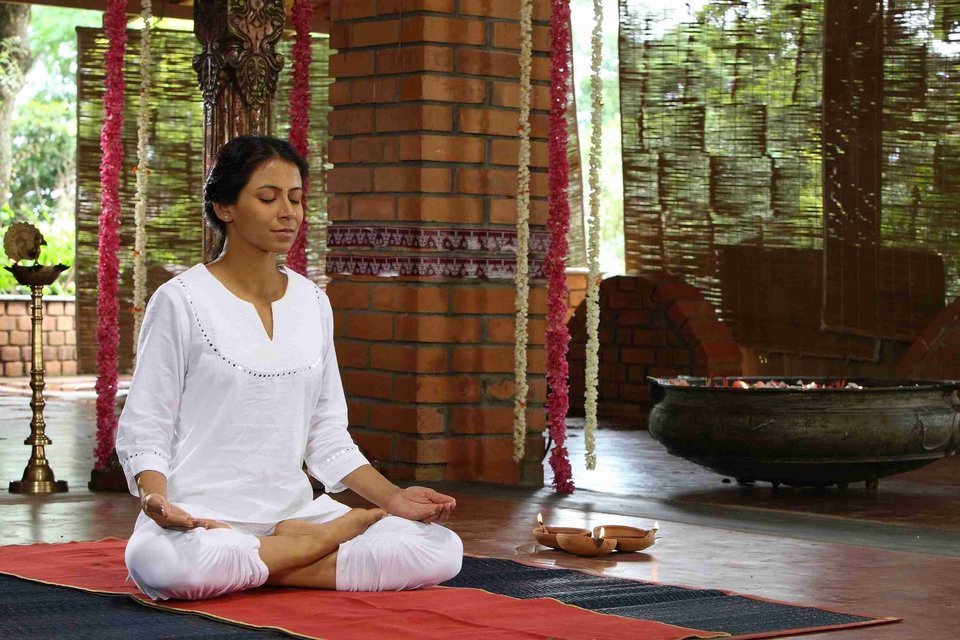 Who is not aware of the eloquent benefits of Yoga? Yet many times we deter from including Yoga into our daily lives. Sometimes the reasons can be preoccupied schedules, other times it is our ineptitude or lack of commitment. Do you also need enough motivation to take a step towards a more holistic and healthier lifestyle? Join our 3 days residential Yoga and Pranayama Wellness Retreat Program Tour to gain more insights into Yoga and Pranayam. Enjoy 3 motivating days amidst the serene surroundings of Goverdhan Eco-village. Feel the ecstasy of being close to nature. Understand different walks of wellness through Yoga and Pranayama. Enrich your understanding of leading a balanced, healthy life. Our Yoga And Pranayama Wellness Retreat Tour welcome you at the Goverdhan School Of Yoga to introspect deeper levels of consciousness and cope up with your demanding urban lifestyle. Take a break from your pre-occupied schedules, relieve your anxiety and stress, and equip yourself with the knowledge of classical Yoga. Learn the concepts of health, healing, spiritual well-being, and rejuvenation.   Important Dates The 3 days Yoga And Pranayama Wellness Retreat Program tour will be organized multiple times between September 2018 to March 2019. You can enrol for the following duration or dates: 01 Sep 2018 - 03 Sep 2018 01 Nov 2018 - 03 Nov 2018 01 Dec 2018 - 03 Dec 2018 04 Mar 2019 - 06 Mar 2019 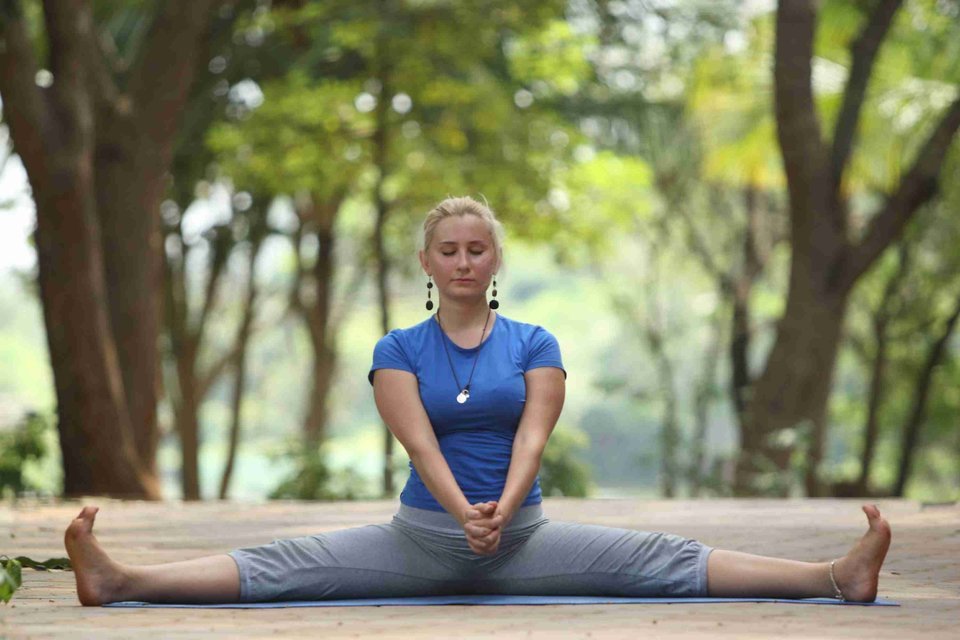 Women are the most gifted creatures created by God to accomplish so many tasks at the same time. A woman can be a homemaker, a housekeeper, a guardian, a caregiver, and a working person at the same time. Rushing through the tedious schedule, meeting deadlines, and checking through the endless to-dos demands a lot of energy and focus. No wonder, many women feel exhausted towards the end of the day and frequently suffer from health issues. What women should understand is that they should equally take care of their health as they are not only the foundation for a happy family but also a cornerstone for a salubrious society. Our Certified Wellness Workshop For Women gives you an opportunity to introspect your lives, address your overall well-being, and embrace a healthier future. Yoga can serve as a remarkable self-care tool to ensure physical well-being as well as mental health. It helps you lead a stress-free life while managing all the demanding roles you have to play, being a woman. Join our residential Women’s Wellness Workshop program at the Goverdhan Eco Village and embrace Yoga as an empowering tool to inculcate healthy practices into your quotidian lifestyle.   Important Dates The 5 days residential Women Wellness Workshop will be organized twice between December 2018 and March 2019. You can enrol for the following duration or dates: 22 Dec 2018 - 26 Dec 2018 13 Mar 2019 - 17 Mar 2019

We all know about the life-transforming effects of Yoga to embrace a healthy lifestyle. Since ages, Yoga has been practised as a fundamental element to relieve stress, forgo anxiety, restore physical well-being and ensure mental health. Similar eloquent relieving effects are observed from the verses of Bhagavad Gita, our oldest book of wisdom. The verses of Gita provide profound answers to the most complex questions of existence. The ballads of Gita are a source of inspiration to many. Our Geeta And Yoga Life-Transforming Tour gives you the once in a lifetime opportunity to understand the verses of Gita through 7 valuable lessons. Demystify the secrets of the ancient book of wisdom at the Goverdhan Eco-village with our life-transforming tour. Spend 2 mesmerising days in the Goverdhan Eco-village and embark on a journey of overall health and well-being. Practise Yoga asanas, learn daily pranayama and participate in relaxing meditation classes. Eat healthy Satvik food and participate in beautiful kirtans. Ensure complete self-care through physical, mental, and spiritual detoxification. Discover a better new self with our 2-days life-transforming tour.   Important Dates The 7 days Gita And Yoga Life-Transforming tour will be organized multiple times between October 2018 to March 2019. You can enrol for the following duration or dates: 21 Oct 2018 - 22 Oct 2018 15 Dec 2018 - 16 Dec 2018 09 Mar 2019 - 10 Mar 2019